The largest fire seen in the Humberside area for many years was controlled and extinguished with FREEGEN SF-LV, a Fluorine free, Solvent free and low viscosity fire-fighting foam concentrate. The Thompson Plastic factory fire in the Bridgewood area of Hessle, Hull, involved more than 300 tonne of plastic and was declared a serious incident. This fire was attended and supported by as many as 100 fire-fighters and support staff from the region. Led by Humberside Fire and Rescue Service (HFRS) with additional support by fire-fighter colleagues from other regional Fire and Rescue Services.

The plastic factory which has been in existence since 2003 and boarders the residential area of Bridgewood. When the fire took hold late afternoon on Wednesday 24th November, residents in the area were evacuated due to the proximity of this large fire to homes and other businesses and fears of toxic gases being present in the smoke plume. Thankfully there were no serious injuries reported during the incident and all of the company’s 120 employees evacuated the 9500 m2 manufacturing facility safely. 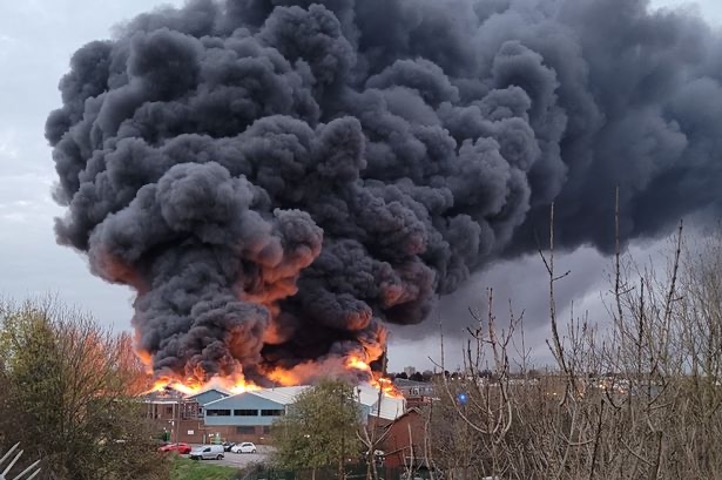 During 2020 and 2021, Humberside Fire and Rescue Service were one of many FRS who have attended fire testing of FREEGEN SF-LV on five fuels at our test facility in Norfolk and then went on to undertake equipment testing at their own facilities. These fire tests at our test site in Seething, Norfolk, followed testing protocols described in EN1568, ICAO and LASTFIRE and included fuels such as Heptane, JET A1, Ethanol, Acetone and Isopropanol. These tests were organized to show that the highest levels of fire-fighting performance of a modern Fluorine Free and Solvent Free foam concentrate can work hand in hand with the highest levels of environmental protection without compromise to either requirements.

In reference to the plastics fire in Hessle, Steve Hellewell, BSc. Station Manager, Emergency Preparedness. Humberside Fire & Rescue Service commented, ‘The incident was declared a major incident with a multi-agency approach to public safety’…. ‘Our bulk foam stocks were requested which consist of a newly acquired Fluorine Free Foam which is also Solvent Free’…. ‘The speed of extinguishment using a modern high-performance Fluorine Free Foam was impressive and enabled us to very quickly stop the air pollution from the smoke plume’.

It is interesting to note that HFRS were one of the few Fire & Rescue Services that had already transitioned to a Fluorine Free foam over the last decade and during a recent review, chose to move to the most modern F3 available in the market today that offers the highest fire-fighting performance, that is also Solvent Free (SF) with Low Viscosity (LV). FREEGEN SF-LV has proven to be the reliable and versatile fire-fighting foam concentrate required by our Fire and Rescue Service’s in the decades ahead. 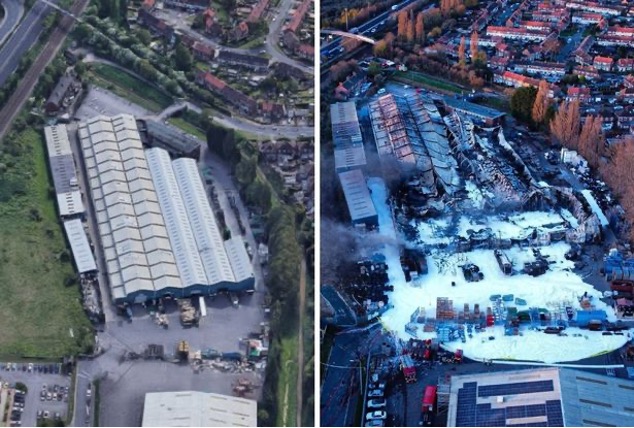 Humberside Fire & Rescue Service (HFRS) recently attended an incident at a plastics factory fire in Hull. The fire started late afternoon and quickly took hold with the whole building quickly becoming involved and producing a huge black smoke plume. Fire Service resources at the incident quickly escalated to 10 fire appliances plus numerous specialist appliances.
Many roads were closed and neighboring commercial and residential premises were evacuated. The incident was declared a major incident with a multi-agency approach to public safety.
We soon decided that a foam attack would be the quickest way to extinguish the 300 tons of burning plastics and eliminate the smoke plume.

A full environmental protection plan was discussed, agreed and implemented with the Environment Agency which involved containing the foam on site. Our bulk foam stocks were requested which consist of a newly acquired Fluorine Free Foam which is also solvent free.
The foam attack commenced late evening and had an immediate positive effect. By the early hours of the morning the fire was very much under control and the smoke plume was significantly reduced. A reduced foam attack continued until first light when the fire was extinguished apart from a few hot spots. The speed of extinguishment using a modern high-performance Fluorine Free Foam was impressive and enabled us to very quickly stop the air pollution from the smoke plume. All foam was contained on site using Environment Agency equipment.